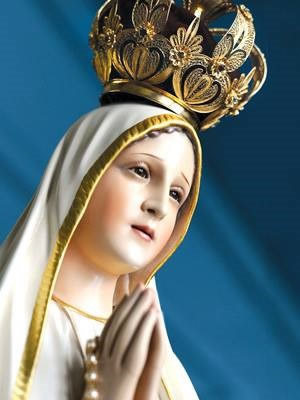 The world-famous International Pilgrim Virgin Statue of Fatima visited our parish on Thursday, November 21, 2019, the Feast of the Presentation of the Blessed Virgin Mary!

And we were blessed indeed! More than 300 parishioners and guests joined us for this extraordinary occasion of healing, hope and grace. This beautiful statue set out from Fatima in 1947 to bring the graces of Fatima to all who might not ever be able to make a pilgrimage to Fatima, Portugal. The pilgrimage came to us!

View Photos from the Event

Hundreds and favors and graces, including cures, and countless conversions are associated with the image. The presence of this special Statue, sculpted by José Thedim based on Sister Lucia's description of her encounters with Our Lady, is a great gift to our community.

The world-famous International Pilgrim Virgin Statue (IPVS) of Fatima was sculpted in 1947 by famous sculptor José Thedim. The image reflects the precise instructions of Sister Lucia (the surviving seer at Fatima). Her desire was that the pilgrim image represent Our Lady’s position when she revealed herself as the Immaculate Heart to the Shepherds in 1917.

The Spiritual Presence of Our Blessed Mother 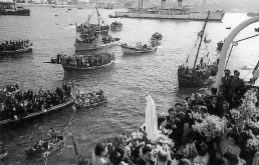 In the presence of hundreds of thousands of pilgrims at Fatima, the statue was blessed by the Bishop of Fatima on October 13, 1947. It was the second “twin” statue commissioned as the Pilgrim Virgin that would carry the blessings of Fatima to the West (including the Americas) while the first statue, commissioned on May 13, 1947, would travel to the East. The purpose of the Pilgrim Virgin Statue tours was and still is to bring the graces of Fatima and Our Lady’s message of hope, peace and salvation to those many millions of people who may never have an opportunity to make a pilgrimage to Fatima itself.

The Bishop entrusted the statue to John Haffert, co-founder of the Blue Army, and prayed that Mary herself accompany the statue wherever it goes. Mr. Haffert had met with Sister Lucia in 1946 to understand what Our Lady wanted of the Catholic faithful and together they composed what came to be known as the Blue Army Pledge.

Six days after the blessing, Mr. Haffert brought the statue to Canada where it was solemnly crowned on the grounds of Ottawa University by the Most Rev. Alexandre Vachon, D.D., Archbishop of Ottawa. 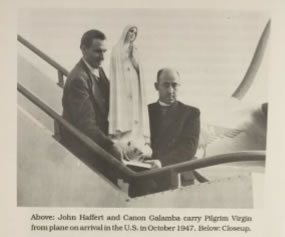 On December 8, 1947, the Feast of the Immaculate Conception, the statue entered the United States in Buffalo, NY. The Buffalo police reported that they witnessed the greatest traffic jams in their history when nearly 200,000 people lined the streets to welcome Our Lady.  In the intervening two years, under the direction of Monsignor William McGrath, the first statue custodian, the Pilgrim Virgin statue visited more than 50 dioceses in Canada and the United States, filling cathedrals, churches and other venues from Boston to California, from Canada to the Gulf of Mexico. In the St. Louis cathedral, 310,000 people were in attendance in one week; in the Buffalo cathedral, 220,000 were present during a stay of 35 hours; and 125,000 attended Our Mother of Sorrows church in Chicago, in a single day.

On May 13, 1951, the statue arrived at Fatima at the close of the Holy Year designated by Pope Pius XII. Over a million people were there for this solemn occasion. During his radio address, His Holiness remarked:  “In 1946, I crowned Our Lady of Fatima as Queen of the World and the following year, through the Pilgrim Virgin, She set forth as though to claim Her dominion, and the favors She performs along the way are such that we can hardly believe what we are seeing with our eyes.”

A Special Blessing for the Pilgrim Virgin Tours

On October 24, 1952, Pope Pius XII blessed the statue and imparted a special blessing on the work of the Fatima Pilgrim Tours. Largely through the Pilgrim Virgin Statue tours, Mr. Haffert went on to spread the Message of Fatima worldwide and more than 20 million people signed the Blue Army Pledge. The Bishop of Fatima accompanied Mr. Haffert and the statue custodian on many tours and special “world peace flights.” The most famous peace tour occurred on October 16, 1992 when six bishops descended on Red Square in Moscow carrying the Pilgrim Virgin Statue.  It was crowned at midnight in front of Lenin’s tomb.

An uninterrupted flow of graces and favors have been reported wherever the statue has traveled, including physical cures (which can only be officially pronounced by Church authorities). More important, people are converted and return to the sacraments after many years of being away from the Church.

On the occasion of the Eucharistic Congress that took place Lourdes, France in 1981, the statue remained overnight at the convent in Coimbra, Portugal, at Sister Lucia’s request. She remarked afterwards that she had never seen any image which so resembled the actual apparition of Our Lady.

John Haffert reported in his book, “Her Own Words”:  I do not hesitate to say that I myself have seen that image change its appearance. I was privileged to accompany the statue to America, with Canon Oliveira in October 1947. On more than thirty occasions the statue has shed tears and once I myself wiped a tear from its cheek.

That Lucia found the image “so much like Our Lady” is remarkable. In 1946 I had shown Lucia many pictures of Our Lady, hoping that she would say that one was more like Our Lady than another. She looked at every one of the images with almost absolute indifference. None…not even the most beautiful, resembled the actual vision of Our Lady who was “more brilliant than the sun.”

Indeed, Our Lady appeared to be so beautiful to all three children that they after seeing Her they wanted to die, finding no beauty any longer in anything on earth! I have never doubted that when Lucia had the Pilgrim Virgin statue in the Coimbra convent overnight, through the miraculous image Our Lady gave her again the experience of Her “presence,” even as She conveyed this sense of Her “presence” all around the world through this miraculous image.

The statue has visited more than 100 countries, including Russia and China, bringing the great message of salvation and hope, “the peace plan from Heaven,” to countless millions of people.

The custody and mission of this world-famous statue is under the auspice of the World Apostolate of Fatima USA – Our Lady’s Blue Army - which continues her journeys throughout the world with its principal statue custodian Patrick L. Sabat.

Physical cures attributed to the presence of the International Pilgrim Virgin Statue of Our Lady of Fatima have been documented many times. The changes in expression and coloration, and even the pose of the statue have been reported innumerable times.

The important miracles, however, are the spiritual cures and gifts Our Lady bestows. The sudden conversion of a stubborn heretic is a good example. Another important miracle is the enlightenment of someone who has resisted the idea of statues, or the idea of praying to saints.

Spiritual miracles are infinitely more valuable than the things we can see, touch, or measure.

During Her tour of the New Orleans diocese, the statue shed tears on numerous occasions. This was the first time that the press reported widely the miracles of tears from the International Pilgrim Virgin Statue. Although it is known that tears have run from Her glass eyes numerous times before, none of those had gained much attention. This time the press began to report it, large crowds flocked around and even Archbishop Hanann was asked to comment by reporters. He took the statue and had it investigated. That was the first time it was discovered that the moisture was human tears and also the first time photos began to circulate. The statue has shed tears very frequently ever since.

The miracle of tears is something that is often reported. It happens in more than one way. Frequently, an individual sees the tears on the statue while others at the same time do not. Perhaps this is mystical and not physical. But other times all present see the same thing and the tears can be wiped away causing dampness on the cloth. This then is a physical miracle. Regarding the number of times it has occurred, most go undocumented, and almost all go without publicity. Therefore, although we know it has shed tears dozens, and probably hundreds of times, only a few have been published.

The World Apostolate of Fatima, USA – Our Lady’s Blue Army – is a Public Association of the Faithful under the Pontifical Council for the Laity – the official voice of the Vatican on the Message of Fatima. Its mission is to learn, live and spread the message of Our Lady of Fatima, in communion with the Church and in concert with the New Evangelization. For more information visit www.bluearmy.com.