On Sunday, November 1, 2020, this tiny relic of St. Clare was installed in our church. Be sure to stop by to see this beautiful reminder of the saints who have gone before us! Watch the video of the ceremony. Check out the photos here. 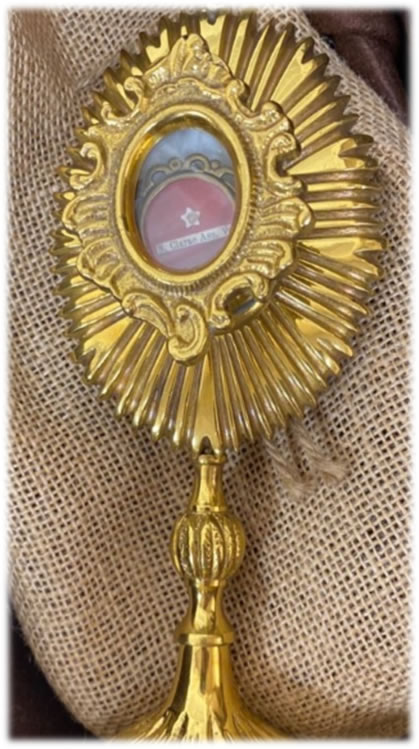 St. Clare of Assisi
What a great laudable exchange:
to leave the things of time for those of eternity,
to choose the things of heaven for the goods of earth,
to receive the hundred-fold in place of one,
and to possess a blessed and eternal life.

Clare was born into the nobility of Assisi on July 16, 1194. As a little girl she was known by members of her household to be a sensitive child, gentle, prayerful and kind. She would sometimes hide food from her plate so as to later give it to the poor.

After hearing a young man (St. Francis) preach, she became determined to live the gospel in a more radical way. On the evening of Palm Sunday, March 20, 1212 she secretly left her paternal home with her cousin Pacifica, never to return. In the dead of night lit only by torches, Clare met Francis and his friars at the ‘Portiuncola’. There, in the little chapel of ‘Mary of the Angels’, she laid aside her rich clothes and Francis, after cutting off her long blonde hair, clothed her in a rough tunic and a thick veil. From that moment she vowed to live her life entirely in the service of Jesus, her heavenly spouse.

She was placed by Francis temporarily with the Benedictine nuns of San Palos near Bastia, then to San Angelo in Panzo until finally to San Damiano, which Francis had rebuilt with his own hands. Thus was founded the first community of the Order of Poor Ladies or Poor Clares.

Clare became the abbess of San Damiano in 1216, and, while spending her days doing manual labor and praying, she began dedicating much of her time to changing the governing rule (established by the pope) of the order from the Benedictine spirit to one of the newly established Franciscan rule. (Two days before Clare died, Pope Innocent IV finally approved her request.) The order became known for its life of abject poverty and committed life of prayer, prayer that Clare used to attain worldly victories that are credited with saving Assisi on two occasions.

The first involved Clare raising the Host up in a window, thereby causing Frederick II's invading troops to fall back. In the second instance, Assisi was again under attack. Clare and her nuns prayed for the safety of their town, and a storm swept in and scattered the attackers.

Clare cared for Francis toward the end of his life and was with him when he died in 1226. Afterward, despite ill health, Clare continued to promote the growth of her order until her death in 1253. In August 1255, Pope Alexander IV canonized Clare, and today the Order of Saint Clare numbers more than 20,000 sisters worldwide, with more than 70 countries represented.

Place your mind before the mirror of eternity!
Place your soul in the brilliance of glory!
Place your heart in the figure of the divine substance!
And transform your whole being
into the image of the Godhead Itself through contemplation!
So that you too may feel what His friends feel as they taste the hidden sweetness
Which God Himself has reserved from the beginning
for those who love Him
—From Clare’s Third Letter to Agnes

In the days before cell phones, email, online education, or Zoom, Clare and Agnes communicated via hand written letters personally carried back and forth between Bohemia and Assisi by Franciscan Friars as they made their dangerous travels on foot across Europe. Clare shared her insights about the spiritual life with Agnes in these letters. Clare chose to use a mirror as a metaphor for the spiritual life; the image of a mirror worked effectively as a spiritual metaphor that would have been understood well by women of nobility.

A Letter of St. Clare to St. Agnes of Prague

Consider the poverty, humility and charity of Christ

Happy the soul to whom it is given to attain this life with Christ, to cleave with all one’s heart to him whose beauty all the heavenly hosts behold forever, whose love inflames our love, the contemplation of whom is our refreshment, whose graciousness is our delight, whose gentleness fills us to overflowing, whose remembrance makes us glow with happiness, whose fragrance revives the dead, the glorious vision of whom will be the happiness of all the citizens of the heavenly Jerusalem. For he is the brightness of eternal glory, the splendour of eternal light, the mirror without spot.

Look into that mirror daily, O queen and spouse of Jesus Christ, and ever study therein your countenance, that within and without you may adorn yourself with all manner of virtues, and clothe yourself with the flowers and garments that become the daughter and chaste spouse of the most high King. In that mirror are reflected poverty, holy humility and ineffable charity, as, with the grace of God, you may perceive.

Gaze first upon the poverty of Jesus, placed in a manger, wrapped in swaddling clothes. What marvelous humility! What astounding poverty! The King of angels, Lord of heaven and earth, is laid in a manger.

Consider next the humility, the blessed poverty, the untold labours and burdens which he endured for the redemption of the human race.

Then look upon the unutterable charity with which he willed to suffer on the tree of the cross and to die thereon the most shameful kind of death. This mirror, Christ himself, fixed upon the wood of the cross, bade the passers-by consider these things: ‘All you who pass this way look and see if there is any sorrow like my sorrow.’ With one voice and one mind let us answer him as he cries and laments, saying in his own words: ‘I will be mindful and remember and my soul shall languish within me.’ Thus, O queen of the heavenly King, may you ever burn more ardently with the fire of this love.

Contemplate further the indescribable joys, the wealth and unending honours of the King, and sighing after them with great longing, cry to him: ‘Draw me after you: we shall run to the fragrance of your perfumes, O heavenly bridegroom.’ I will run and faint not until you bring me into the wine cellar, until your left hand be under my head and your right hand happily embrace me and you kiss me with the kiss of your mouth.

In such contemplation be mindful of your poor little mother and know that I have inscribed your happy memory indelibly on the tablets of my heart, holding you dearer than all others.

LET US PRAY
O God, who inspired St. Clare of Assisi to shine her light on the Gospel and live a life of uncompromising fidelity, grant that through her merits and intercession, we may walk in the path of righteousness in this life so as to enjoy the life that will never end. We ask this through Christ our Lord.   AMEN

The Peace Prayer of St. Francis of Assisi