About a year and a half ago I was having a conversation with my brother-in-law, who had left the Catholic Church more than thirty years ago, about our family's involvement at our parish. I told of our boys serving at the altar and my wife and I being ushers and Extraordinary Ministers of the Holy Eucharist.

It was at this point that he asked, "Do you really believe in transubstantiation?"

I paused, shook my head, and sighed, "I don't know. But what I do know is that when I hold up the Host and announce 'The Body of Christ' I can see the look of faith in the eyes of those who do believe, and it is POWERFUL!" I then said, almost under my breath, "I wish that I had that Faith." Little did I know that this would be one of those prayers that God actually does answer.

Today we come to the end of the year, the liturgical year, that is. The last couple of weeks our readings have been talking about the end times, and the second advent- the second and final coming- of Jesus Christ. And so, appropriately on this last Sunday of Ordinary Time, we celebrate Jesus Christ our Lord and King. This is such an important feast, but one that is hardly understood or lived out today in our culture. Our readings today are so inspiring, so let us begin our reflection of them so that we can come to know, appreciate, and love God anew through them.

Awakening to the Catholic Church

I was baptized Catholic and grew up in a Catholic family. Like many Catholic families, we attended Mass most weeks, said prayers now and then, and were taught the basics about God, Jesus, and Mary. Yet I never saw the Catholic Church for what it was; I never realized the enormous comfort, strength, and wisdom contained in the Church. I spent so many years of my life looking for answers and fulfillment in all the wrong places, not realizing that the treasure I was looking for was right before me all along! This is the journey that led me back to the church and awakened me to its abundant grace and beauty.

As a young adult, I attended Mass somewhat regularly but would describe myself as a half-hearted Catholic at best. I loved God and wanted to serve him, but wasn't convinced that I necessarily needed a religion or church to do that. I was married and had my first son by the age of twenty-one, so I went to church mainly for my son's sake.

We are drawing this liturgical season to the end before we start anew with Advent in 3 weeks.  And so, our readings are apocalyptic, they are about the end times.  They are about the final coming of the Lord Jesus, and the consummation of all things.   And so, we are asked to reflect on these dark, but still illuminating matters.

Our 2nd reading is from the first letter St. Paul to the Thessalonians. It is the earliest letters of New Testament, written about the year 50, about 20 years before the first Gospel.  Paul is writing about the one event which changed his life. Paul encountered the Risen Jesus and the realization of that truth of Jesus Christ changed his life.  It revolutionized his thinking, his acting, his very being.

These are some of the comments and questions St. Vincent de Paul, Corpus Christi Conference (SVdPCCC) members have heard throughout the years. Hopefully, in the following paragraphs, these questions will be answered. But more importantly, we would like to convey how blessed our Corpus Christi community really is and how its partnership plays a wonderful and appreciated role within the Society ofSt. Vincent de Paul.

Finding Grace: A Story from Corpus Christi’s Pilgrimage to Fatima

I've just recently returned from Corpus Christi's pilgrimage to Fatima, Santiago, Lourdes and Paris. I was so excited to participate and didn't know what to expect. I felt called to this pilgrimage by the experiences my daughter had the previous summer in Spain and through some inkling deep within me that surely was the Holy Spirit. Before I left I had asked myself, "Why am I going? What does God want me to receive from this experience?" I knew that I wanted reparation for my sins and the sins of others, but I still wasn't sure what God had in store for me along the way.

This is a little story of how the Lord helped us all, Find Grace:

Love of God is our source to love

Jesus in our Gospel today gives us what should be the foundation of our lives- what our entire lives should be consumed about.

Trying to trip Jesus up, a scholar of the law asked which commandment of all the laws of Moses is the greatest? When you and I think of the commandments we probably think of the 10- right. At least I hope we think of the commandments. But for the Jews, in the Torah- which are the first 5 books of the Bible, Moses gave 613 laws. The Jewish people had 613 laws and restrictions that they were to live by in order to be good Jews. Things like not eating unclean animals, refraining from any kind of work on the sabbath, etc. The 10 commandments we know of from Exodus 20 are just 10 of the 613. So, this scholar is asking, which of all 613 is the greatest?

Remembering the Reformation — Together: Why Christian unity is closer now than before

In recent years both Catholics and Protestants have been puzzled by occasional mentions in the press that the two groups would be jointly commemorating of the upcoming five hundredth anniversary of the Protestant Reformation.

Why would Catholics commemorate such an event?

Let’s talk about that.

According to legend, on October 31, 1517, Martin Luther nailed his 95 Theses to the door of the castle church in Wittenburg, Germany.

Despite the legend, we don’t have solid evidence that he actually did this, but it is true that in 1517 Luther published a set of 95 propositions he proposed for academic debate.

An Excerpt from Devin Rose's The Protestant's Dilemma 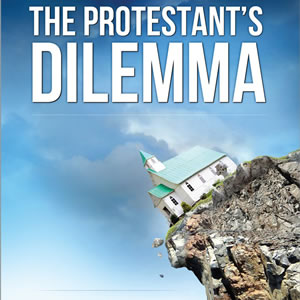 Over the summer, our bulletin ran a series of articles by Ken Hensley about the Protestant Reformation (What was the Reformation and Why Did it Happen). The feedback from parishioners has indicated that the series was very helpful and informative. As thismonth marks the 500th anniversary of the Reformation, it is our responsibility as Catholics to continue our understanding of our Faith in comparison to Protestant claims. There are numerous apologetics articles and books that one could read. One such book is The Protestant's Dilemma by Devin Rose, a Catholic convert, in which he examines over thirty Protestant claims and what they would signify if thought through logically. The following excerpt is from Chapter 2:The Papacy.

Mass is Our Wedding

Think for a moment about a wedding- perhaps you think of your own wedding, or the last wedding you went to. What do you think about?  Is it the genuine love and excitement of the couple- the bride in her beautiful white dress and the groom in a nice tuxedo. Perhaps you think about the vows in which the man and woman promise to love and honor each other, through good times and bad, for the rest of their lives.  Through which the couple are forever united to each other, where they vow to give themselves- body and soul- out of love to each other.  The 2 become 1- what an amazing thing that happens at weddings.

In our Gospel, Jesus gives a parable in which a king plans a wedding for his son, and all the invitations were sent out.  Can you imagine receiving an invitation to the wedding of the king’s own son- what a royal and grand event it would be. The best invitation, from the highest person imaginable, to the greatest event.   Wouldn’t you be so honored that you were invited that you’d RSVP ‘yes’ right away? Wouldn’t you drop anything else you had planned that day, and no matter what happened you would go to this amazing event?

A few weeks ago, I highlighted the roles that the congregation participate in as part of the liturgy (service of God and each other). I want to thank everyone who has accepted the challenge of increasing the efficacy of our Masses! I have felt the increased focus and participation. Your prayerful silence and your joyful exclamations have made an impact on my experience at the Mass…and I am grateful to you for that!

What if God is calling you to go beyond the expectations of “normal” participation in the liturgy? (I use the word normal in quotes, because there is nothing ordinary or normal about real participation in the Mass!) Today I would like to highlight the various liturgical ministries and offer you an invitation to participate even more deeply in the service of the Mass.

The Knights of Council 10062 have long acknowledged that their successful operation as one of the leading Councils in Arizona is due in large part to the overwhelming support of our pastors and parishioners. The practice of the Order’s first principle, Charity, would not be possible without the loyal patronage and unending collaboration of the Corpus Christi Catholic Community. We are immensely appreciative of the continuous support provided by our parishioners.

The generosity of Corpus Christi Parishioners in support of Knights’ Charities has had an enormous impact on our community. One example is the PWID Campaign (Persons with Intellectual Disabilities), was the first fundraiser event our Council undertook after it was founded. The iconic yellow cans, aprons and nationally recognized Tootsie Roll candy have since become an annual event.

Many Reasons to Celebrate

This week is one of my favorite weeks of the year. We celebrate two of my favorite Saints: St. Thérèse of Lisieux, the Little Flower, on October 1 (though this year it is trumped because it falls on a Sunday) and St. Francis of Assisi on October 4. Additionally, on September 29 we celebrated the Archangels and on my birthday, October 2, we’ll celebrate our Guardian Angels. Furthermore, my sister’s birthday is October 5.

Last week, if you remember, the Gospel was the Parable of the Landowner who hired workers to work in his vineyard at different times of the day, but paid each worker equally, no matter how long they worked. In his homily, Dcn. Chris Kellogg led us to reflect on the joy it is to be called to work in the Lord’s vineyard. For me personally, that truth has been resonating in my heart.

Repent and Pursue Holiness and Virtue

Our God is a God of love.  The all-powerful, all-knowing, Creator of the world; the Creator of you and I.  Our loving God has revealed Himself to us as our Father, and we are His beloved children.  Our God has made each one of us with such intentional purpose and love, and has a great plan for each and every one of our lives.  God has revealed his ways to us, in the Scriptures, through the Church, and in our own prayer, God has revealed how he wants us to live, He has revealed his will for us.  So, God has revealed his ways to us and has sent His Son to become human and redeem us from the waywardness of our sin.  My brothers and sister, our God, of unfathomable love, has done and continues to do everything He can to welcome us into right relationship with Him.  He says to us in our 1st reading: “You say, ’The Lord’s way is not fair’”.  Keeping in mind who the Lord is, the all-knowing and all-loving Creator and Father; isn’t it right and true for Him to say to us, “Is it my way that is unfair, or rather, are not your ways unfair?”